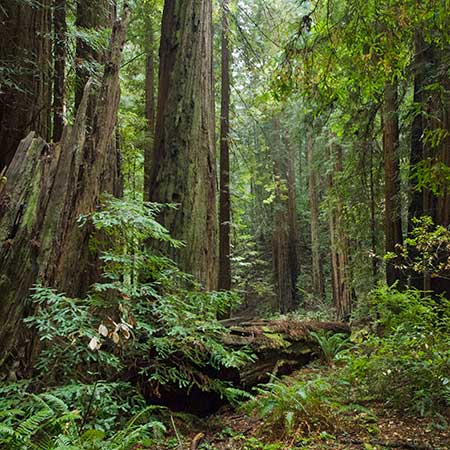 Coast redwoods are the definition of resiliency. Among the tallest trees in the world, individual redwoods may live as long as 2,000 years. Thick bark and an ability to resprout enables established adult trees to survive most wildfires, high levels of tannins make them resistant to insect and fungal infestations, and acidic soil conditions, thick duff layers, and dense shade also make coast redwood forests relatively resistant to non-native plant invasions.

Wide-spread tanoak die-back and resprouting as a result of Sudden Oak Death (SOD) has led to a persistent thicket of tanoak shoots in the redwood understory. The continual re-infection of these tanoaks prevents the shoots from developing into midstory level trees, and has reduced the habitat complexity of the mountain's redwood forests.

Finally, redwoods may serve as an indicator of climate change, particularly changes in precipitation patterns and summer fog (Micheli et al., 2016). A sudden decline in such a long-lived and resilient species would signify changes on a scale likely to be detrimental to other vegetation communities on Mt. Tam.

In second-growth forests, the desired condition is evidence that a stand is on a trajectory towards development of old-growth characteristics. This includes a reduction in the total stem density over time as well as the development of large diameter trees and a multi-storied stand structure (Lorimer, 2009).