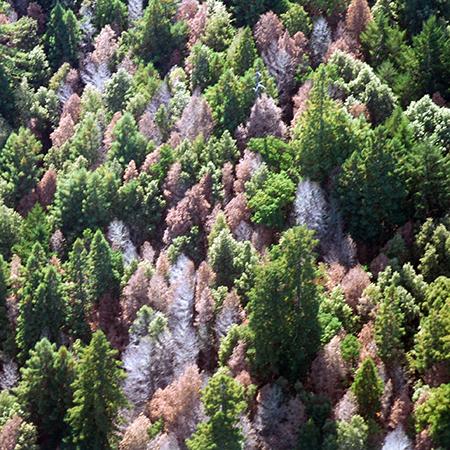 Sudden Oak Death (SOD), caused by the introduced pathogen Phytophthora ramorum, was first documented in the United States on Marin Municipal Water District and State Park lands in Marin County in 1995 (Garbelotto & Rizzo, 2005). In the ensuing years, it has killed tens of thousands of trees on Mt. Tam. Vegetation mapping completed in 2004, 2009, and again in 2014 has tracked the rapid spread of the disease across watershed lands. The 2014 update found that over 90 percent of oak woodlands were affected by the disease. Overall, 84 percent of forested areas were impacted, though the degree to which they have been affected varies by the species composition of the forest and by tree canopy characteristics (AIS, 2015).

The mortality rate exceeds 80 percent for tanoak (Notholithocarpus densiflorus) which has resulted in the transformation of thousands of acres where this species was once dominant in the canopy. Mortality rates are lower but still significant among coast live oaks (Quercus agrifolia), and black oaks (Q. kelloggii). Dozens of other native tree and shrub species also experience damage and/or lower levels of mortality. White oaks, including valley oaks (Q. lobata) and Oregon oak (Q. garryana), are not impacted (APHIS, 2013).

In addition to causing dramatic changes in habitat structure, dying and dead trees are increasing fuel loads. The effects of the loss of oak trees on species dependent on them for food and shelter (e.g., dusky-footed woodrat, acorn woodpecker) are not yet known (Nik et al., 2016).

Several other disease-causing forest pathogens have either been observed in small infestations on the mountain or have a high likelihood of invading in the near future. These pathogens have many of the same ecosystem effects as SOD, including changes in species composition and ecosystem functions, loss of wildlife food sources, changes in fire frequency or intensity, decreased water quality due to increased erosion, and greater opportunities for weed invasion in newly open areas (LCA, 2009).

In particular, P. cinnamomi is deadly to Pacific madrone (Arbutus menziesii), California bay trees (Umbellularia californica), and some species of manzanita. This pathogen is known to occur in Marin County, including several locations on Mt. Tam. Although P. cinnamomi spreads more slowly than P. ramorum, it has a much broader range of hosts and therefore has the potential to also kill a wider variety of plant species (Sims et al., 2016).