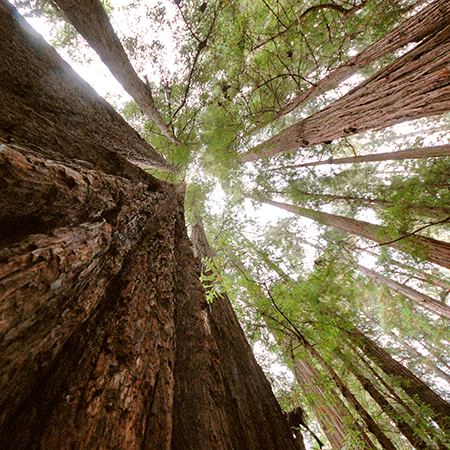 The climate vulnerability of Mt. Tam’s plant and bird communities were also considered through this health assessment process, as was the vulnerability of certain iconic species. All global climate models predict warmer temperatures for California through the next century, though they do not agree on changes to precipitation. A collection of species and plant communities that are potentially vulnerable to climate change should make good indicators of how rapidly the mountain is being affected by changing conditions.

Two recently published assessments of the potential impacts of climate change to vegetation in California can offer useful projections of the sensitivities, vulnerabilities, and potential future distributions of major vegetation types.

Those projected to increase in extent included chamise chaparral, blue oak woodland, interior live oak woodland, semi-desert scrub, and coast live oak forest and woodlands. These types are expected to shift more toward the coast and to lower elevations.

Those that were projected to decline in extent generally represented vegetation found in cooler and moister locations and several were projected to substantially retract (including redwood forest and coastal scrub) or disappear entirely (black oak forest/woodland, canyon live oak forest, tanoak forest). These declining vegetation types are expected to shift more away from the coast and to higher elevations.

Grasslands are currently the most extensive vegetation type in the Marin coastal area that were also projected to decline, although the impact to grasslands was highly dependent upon future rainfall amounts.

Climate vulnerability ranks were then assigned to 31 vegetation types (called “macrogroups”) based on life history traits that would indicate its sensitivity to, and adaptive capacity for, a changing climate as well as the projected climate exposure and future extent of unsuitable distribution. Climate vulnerability categories included: moderate, mid to high, and high. The higher the vulnerability of a vegetation type to future climate scenarios, the more likely it will be stressed by future climates.

We took the results from those macrogroups which related to our key vegetation community indicators, and displayed them next to a graphic depicting the current condition and trend of these communities within the One Tam area of focus (see figure below). From this comparison of how our communities are faring right now, and how vulnerable they are likely to be in the face of climate change, we can see which communities might be facing the biggest pressures and are in more significant danger of future impacts as a response to climate change.

Maritime chaparral and oak woodlands were considered moderately sensitive to climate change while the remaining vegetation indicators were even more so, earning them a rank of mid to high sensitivity.

This roll-up was created using a subset of birds from the species trait-status database that scored “yes” for climate vulnerability, which were then sorted by habitat association. Each habitat got one segment in the chart above regardless of the number of birds within that habitat type (the fewest was one bird per guild, the most was 13). Condition, trend, and confidence were rolled-up to the habitat for that pie segment, then rolled-up again for the overall current condition, trend, and confidence.

The climate change vulnerability assessment for birds relied heavily on only one component of vulnerability: whether a species' probability of occurrence within the One Tam area of focus was predicted to change. We visually compared contemporary occurrence with two climate change futures, based on two different climate models (http://data.prbo.org/cadc/tools/ccweb2/index.php), and when the probability was predicted to decline, we considered the species vulnerable.

Overall, climate change vulnerable bird species are in Good condition with No Change in trend. This may be because any likely reductions in the probability of occurrence as predicted are not yet realized. In other words, the climatic and vegetation conditions used by the model that result in predictions of change are not yet occurring in the One Tam region, or if they are there is a lag time in bird response. It is also possible that some species can adapt to changing conditions and hence not behave as predicted by changes in climate and vegetation alone.

A more complete picture of climate change vulnerability that includes factors other than a change in probability of occurrence would provide a more accurate picture of what birds are the most sensitive indicators of change.

Coho salmon (Oncorhynchus kisutch) are good indicators of the effects of climate change on a variety of habitats as they require freshwater and open ocean habitats in order to thrive. Coho salmon will not fare well under the current climate projections of shorter, more intense periods of rainfall and extended droughts. Rising temperatures will likely cause greater evaporation of streams and floodplain habitats, and intense rainfall can cause erosion and harmful sediment deposition. However, the many habitat restoration projects both completed and in progress in the watersheds of the One Tam area of focus may help counteract some of these impacts.

California red-legged frogs (Rana draytonii) are good climate change indicators as they require a variety of aquatic and terrestrial habitats for different parts of their lifecycle. Under hotter, drier current climate projections, survival of egg masses and tadpoles are likely to decrease. Increased frequency and elevation of high tides from sea level rise or more intense storms could also raise salinity levels in low-lying breeding habitat.

Coast redwoods (Sequoia sempervirens) are temperature- and precipitation-sensitive, but how predicted climate changes will impact redwood forest health is complex. Redwoods have shown increased growth with climate changes so far, but increasing soil aridity and the loss of fog could be serious threats. In general, models project that this species will decline in extent across the north coast.

Marin manzanita (Arctostaphylos virgata) is a particularly good indicator of changes in summertime fog. There has been a declining trend in the number of foggy days along the California coast and future hotter climates could further reduce fog frequency.