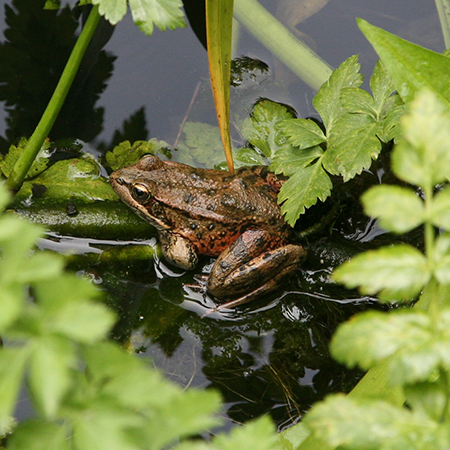 Mt. Tam is part of a core area identified by the U.S. Fish and Wildlife Service (USFWS) for the recovery of the California red-legged frog (Rana draytonii), which was listed as federally threatened in 1996. Within the One Tam area of focus, they are known to live at Muir Beach and in the Olema Creek Watershed. We do not have enough data to know the current status of the Olema Creek population; however, California red-legged frog numbers at Muir Beach have increased thanks to recent stream restoration and breeding pond creation, as well as the reintroduction of egg masses into those ponds.

The trends for breeding site occupancy and egg mass numbers are No Change for Redwood Creek, and Unknown for Olema Creek.

Our overall confidence is Moderate because it is High for Redwood Creek but Low for Olema Creek based on varying levels of available data. California red-legged frog egg masses are large (fist-sized) and relatively easy to find and document in areas where they are surveyed.