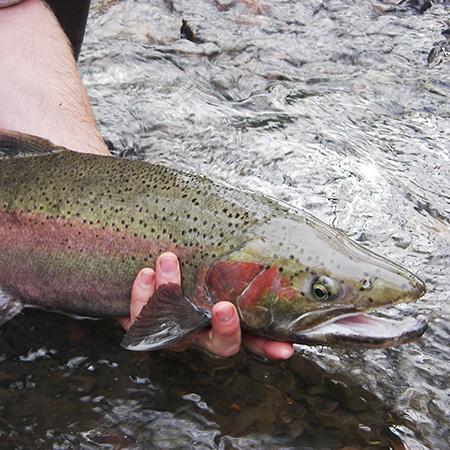 Threatened steelhead trout (Oncorhynchus mykiss) in Redwood and Lagunitas creeks are good indicators of riparian habitat and hydrological conditions as well as ocean health, and provide marine-derived nutrients for aquatic and riparian communities.

Living in both estuarine and stream habitats that vary in depth, velocity, temperature, and shelter, steelhead are not as dependent on stream habitat conditions for survival as coho salmon. To persist indefinitely, steelhead trout should occupy more locations in the Mt. Tam area of focus and should migrate to the ocean in numbers sufficient to allow a viable number of adult steelhead to return each year and spawn. The National Fish and Wildlife Service recovery plan for this species (NMFS, 2012) lists specific goals for numbers of spawners and redds (nests), and smolts (young fish migrating out to sea).

The current trend is No Change for smolt estimates, and there is no evidence to determine whether steelhead occupancy has increased or decreased in recent years. Redd counts since 2008 in Lagunitas Creek show no strong trend. Although redd counts in Redwood Creek appear to have declined since 2012, the survey timeframe is short and there’s low confidence in individual run estimates.

We have only Moderate confidence in these assessments because surveys miss certain time periods and stream segments. Also, steelhead trout tend to migrate to and from the ocean in late winter when stream flows can be high. As a result, there remains a fair amount of uncertainty about the condition and trends of our local steelhead populations. 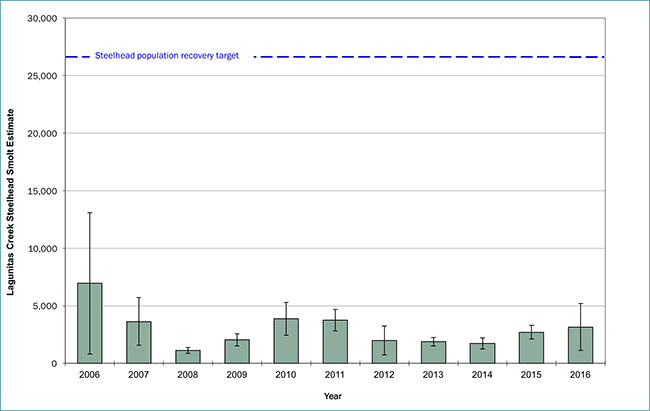