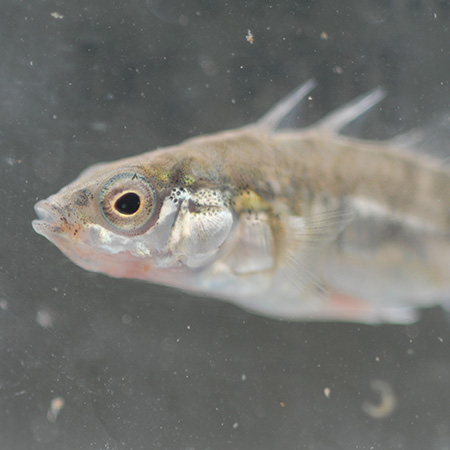 Found throughout coastal drainages in North America, Europe, and northern Asia, the threespine stickleback (Gasterosteus aculeatus) appears to be abundant and widespread in the One Tam area of focus. Threespine stickleback in Redwood and Lagunitas creeks are caught incidentally during salmonid surveys and have not been the subject of targeted monitoring efforts.

Despite limited data, this species is an important indicator of stream health that is easy to recognize and is conducive to volunteer monitoring. A lack of stickleback in suitable, accessible habitats may be evidence of water quality or other problems in the stream and can assist in identifying areas of past or ongoing environmental degradation. Sticklebacks are currently being used as indicators of both hydrocarbon and hormone-disrupting chemical pollution (Ostlund-Nilsson et al., 2007).

The desired condition for threespine stickleback is that they are present in suitable, accessible water bodies. The current and historical extent of threespine stickleback in the One Tam area is unknown, but they are less widespread than steelhead. Of the 110 miles of stream in the One Tam area of focus, approximately 40 miles could be characterized as the kind of slow and low gradient streams this species prefers. These 40 miles, along with the Marin Municipal Water District reservoirs, are currently our best guess at the baseline distribution of stickleback on Mt. Tam.

The current condition is Good, as we believe that stickleback currently occupy all suitable stream habitat, plus Lake Lagunitas.

The current trend is No Change based on the limited data available on the distribution of threespine stickleback in the One Tam area of focus.

Our confidence is Low due to a lack of data. The only surveys that have recorded stickleback have been electrofishing surveys outside the One Tam area of focus and a survey of lake fish in 2006. Additional surveys of potential habitats are needed before their distribution can be accurately estimated. 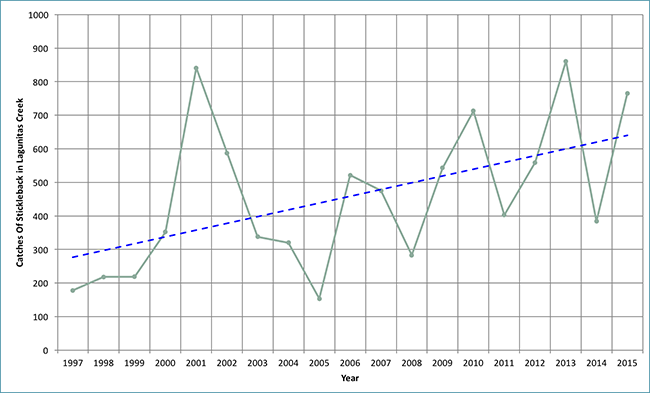