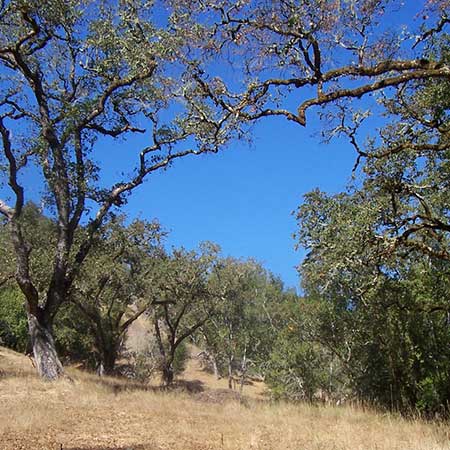 Open-canopy oak woodlands on Mt. Tam are characterized by the presence of long-lived acorn-producing trees from the genus Quercus. Although open-canopy oak woodlands have many tree species in common with mixed hardwood forests, the lower density and patchier distribution of trees create a distinct habitat structure for both herbaceous plants and wildlife. Understory species also include a distinct and more varied array of grasses, sedges, and forbs than closed-canopy forests (Evans & Kentner, 2006).

Oak woodlands in California support 1,400 species of flowering plants and over 300 species of vertebrates—more species than any other habitat type in the state (Mayer et al., 1986). On Mt. Tam, open-canopy oak woodlands can be used as an indicator of forest disease, fire regimes, and habitat quality for a number of oak-dependent birds (Rizzo et al., 2003; Holmes et al., 2008; Cocking, 2014). Lace lichen (Ramalina menziesii), which is California’s state lichen, primarily grows in open-canopy oak woodlands and is a good indicator of air quality (Sharnoff, 2014).

Good examples of this type can be found in the Bon Tempe/Lake Lagunitas area and in the Cascade Canyon Preserve.

What is the Current Condition?

Open-canopy oak woodlands on Mt. Tam are in Fair condition overall. Hardwood canopy cover and the number of acres without canopy-piercing Douglas-fir are both fair, but non-native, invasive species are a significant concern.

Overall, these communities are Declining, primarily as a result of SOD and invasive species.

Although MMWD has recent data on these communities, in many cases data from the other One Tam agencies are lacking yielding a Moderate level of confidence in this assessment.

Mayer, K. E., Passof, P. C., Bolsinger, C., & Garton, E. O. (1986). Status of the hardwood resource of California: a report to the Board of Forestry. Sacramento: California Department of Forestry and Fire Protection. 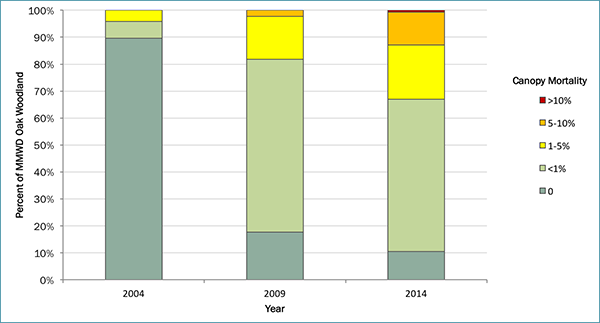