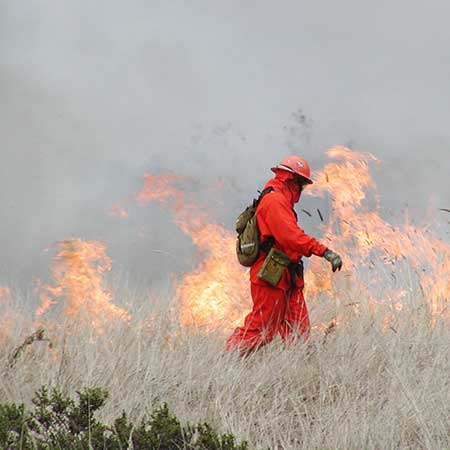 The Effects of Changed Fire Regimes on Mt. Tam

Mt. Tam has not seen a large, stand-replacing fire for over 70 years due to fire suppression policies and practices. While fire suppression is important for protecting local air quality and nearby property, the removal of fire is resulting, in part, in the succession of grasslands to shrublands, shrublands to woodlands, and woodlands to Douglas-fir (Pseudotsuga menziesii) dominated stands. Fire suppression also has implications for the regeneration of fire-dependent species, such as Sargent cypress (Cupressus sargentii) and Marin manzanita (Arctostaphylos virgata).

In addition to these direct impacts, changed fire regimes and fire suppression are interacting with other ecological stressors on Mt. Tam in a variety of ways. Higher fuel loads resulting from trees killed by Sudden Oak Death may increase the intensity of any fires that occur. Large fires burn hotly, and can kill large numbers of trees over a wide area. This both releases nutrients into the soil and increases the amount of light reaching the ground, conditions that can be exploited by non-native, invasive plant species (LCA, 2009).

Climate change is expected to generally cause an increase in wildfires, but underlying factors can combine in ways that make the specific effects difficult to predict. In general, drier and warmer conditions are more favorable to fires. Fire frequencies are projected to increase on the order of 20 percent for Mt. Tam under projected climate scenarios (Micheli et al., 2016).

Although models predict more intense fires, fire suppression policies will continue to maintain the mountain's fire regime in an altered state. This will likely lead to infrequent but large and intense wildland fires driven by extreme fire weather that will burn many acres despite efforts to control them.