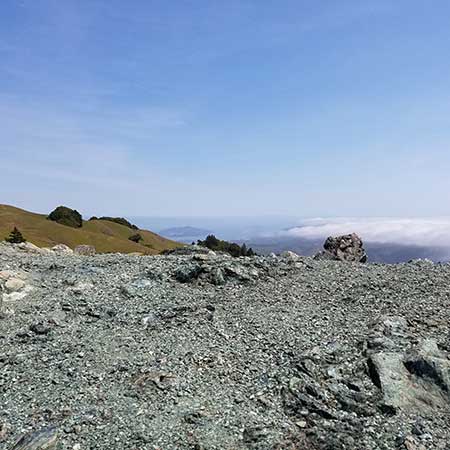 Serpentinite, California’s state rock, creates serpentine soils, which are characterized by low amounts of calcium, high amounts of magnesium, relatively heavy concentrations of nickel, chromium and other heavy metals, and low levels of nitrogen (USDA, 2016). Only certain plant species are able to survive in these soils. Serpentine is a rare soil type statewide, further limiting the distribution of plants that are specifically adapted to its harsh characteristics.

Serpentine barrens are characterized by open, rocky soil and support mostly scattered annuals such as jewel flowers, rosinweed (Calycadenia multiglandulosa), navarretias, and a few perennial plants such as lomatiums, and buckwheats. Many rare and locally rare (and Mt. Tam endemic) plants may also be found within these areas.

Although not calculated yet, some level of historic occupancy for suites of rare serpentine species is desirable.

The overall condition is Fair because while the more “common” rare species are in Good condition, less common rare species and species of special concern are in Fair condition.

Overall, this community is Declining. Populations of the more common rare plant species have not changed, but the rarer ones appear to be in decline.

We have Moderate confidence in this assessment based on combination of surveys and field staff observations.