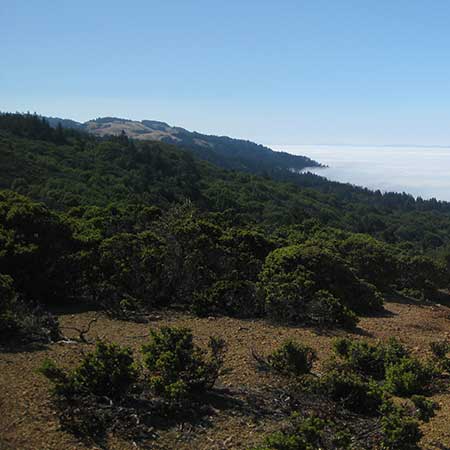 The part of Tam that receives a marine influence (in the form of persistent summer fog) is home to maritime chaparral, a type of chaparral that is associated with several special status plant species.

Over half of the 95 species and subspecies of manzanita in California are locally endemic, occurring in lowlands adjacent to the coast and within the summer marine fog zone (Vasey & Parker, 2014).  As a result of this diversity, maritime chaparral communities are recognized as one of the most diverse woody communities in the state (Sawyer et al., 2009).

Maritime chaparral plant species of special interest in the One Tam area of focus include:

Maintain viable populations of maritime chaparral community endemics over a minimum of 90 acres.

The overall condition of Mt. Tam’s maritime chaparral is Poor. The number of individual plants and age classes of Mason’s ceanothus, Point Reyes ceanothus, and Marin manzanita are in Poor condition, although the overall extent of rare species is good.

Overall, maritime chaparral is Declining. The number of individual plants and age classes of Mason’s ceanothus, Marin manzanita, and Point Reyes ceanothus are declining, though there has been no discernible trend in the extent of rare species.

We have High confidence in this assessment based on recent, comprehensive monitoring and survey data.