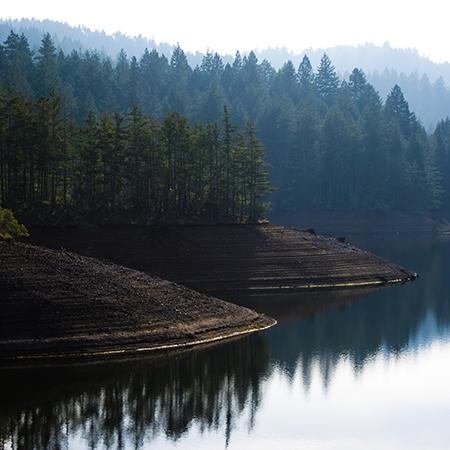 Mt. Tam has the potential to serve as a refuge for plant and animal species in the face of climate change, and associated changes in temperature, precipitation, fog, and soil moisture. Although climate change models show a range of potential future scenarios for Marin County and the San Francisco Bay Area, some common trends are emerging.

Average temperatures rose significantly from 1950 to 2000 across the entire western United States, including the San Francisco Bay Area, and both winter and summer temperatures are predicted to continue rising under future climate change scenarios (Ackerly et al., 2012). Temperature projections from all greenhouse gas emissions scenarios show an increase in annual average temperatures of 2.7°F (1.5°C) between 2000 and 2050, and 3.6°F to 10.8°F (2°C to 6°C) by the end of the twenty-first century (Ackerly et al., 2012).

Future precipitation patterns predictions for Mt. Tam are more uncertain, with projections ranging from 25% more to 25% less rainfall (Micheli et al., 2016). In addition to changes in the overall amount of precipitation, rainfall variability and the frequency of extreme events are expected to increase, which may affect the condition of Mt. Tam's streams and wetlands.

Fog is an important source of moisture on the mountain, particularly during the spring and summer. A 2010 study found that the amount of fog in redwood forests along California's coast has fallen 33% over the past 100 years (Johnstone & Dawson). Fog-dependent plant communities on Mt. Tam such as redwood forests and maritime chaparral may become drought-stressed under conditions of less fog and higher temperatures.

Marin County is becoming more arid due to rising temperatures. Even under higher future rainfall scenarios, these higher temperatures will increase evapotranspiration and reduce soil moisture. This difference between potential and actual evapotranspiration—known as climatic water deficit—is a good indicator of drought stress. Climatic water deficit is projected to increase on Mt. Tam under all future climate scenarios (Micheli et al., 2016).

Changes in temperature, precipitation, fog, and soil moisture may make future conditions inhospitable for certain plant species or even entire plant communities. In the long term, climate change will alter the basic physical conditions under which native plant communities on Mt. Tam evolved, forcing a gradual shift in their composition and distribution. This shift will likely be accelerated by short-term disturbances such as fires and floods, which will become more frequent in a changing climate.

The effects of climate change on animals are similarly varied and challenging to predict, and few studies have been done on how climate change will affect wildlife in the San Francisco Bay Area (Ackerly, 2012). However, changes in vegetation communities will undoubtedly affect the wildlife that depend upon them, and these effects may then also ripple up and down trophic levels.

Wildlife that requires cool, wet conditions may be at greatest risk. Warmer temperatures may change migration patterns, and rising sea levels will likely affect coastal, bay, and lower floodplain areas in the One Tam area of focus. Changing ocean conditions may also impact species such as endangered coho salmon (Oncorhynchus kisutch) and threatened steelhead trout (O. mykiss) that spend part of their lives in Mt. Tam’s streams and part at sea. 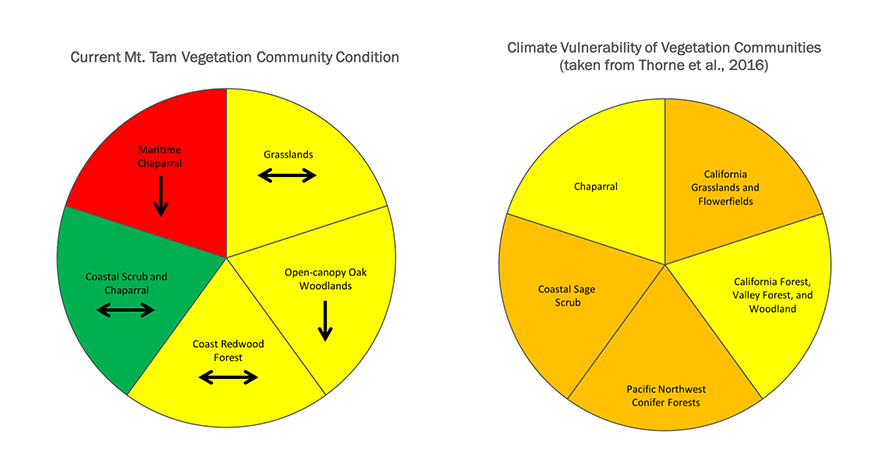