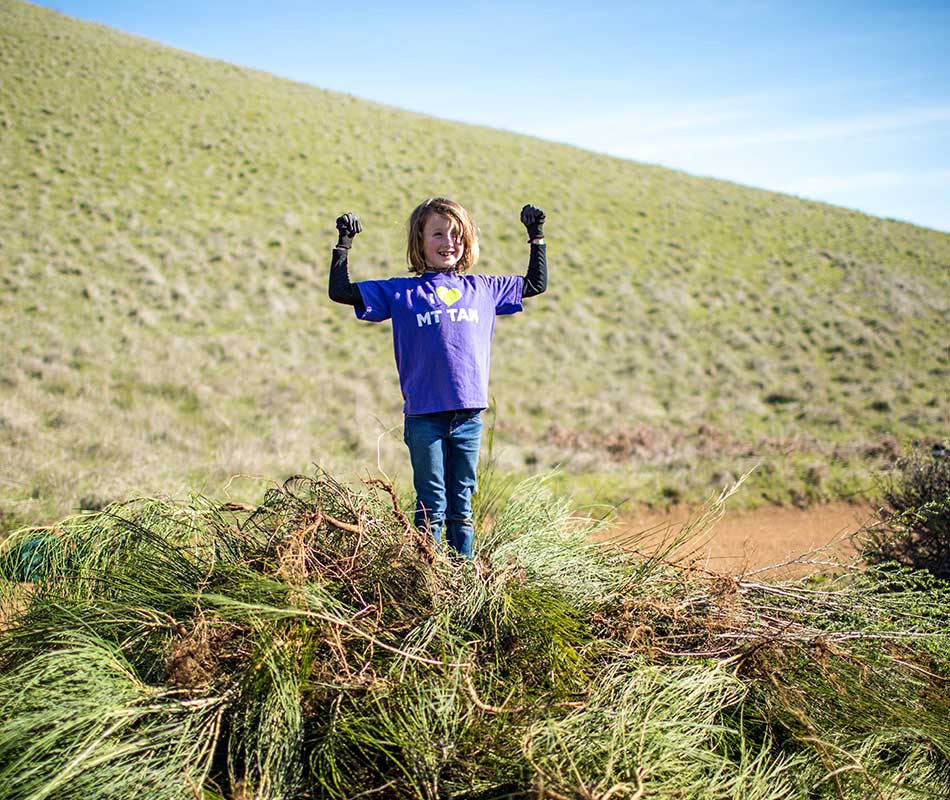 The stewardship and management of Mt. Tam's natural treasures have been underway for decades. The summary of current and past activities listed below is by no means a comprehensive list, but is intended to provide a sense of the type and scale of work that had been undertaken prior to the 2016 ecological health assessment project that led to the Measuring the Health of a Mountain: A Report on Mount Tamalpais’ Natural Resources report.

One Tam staff and partner agencies survey roads, trails, facilities, and recently disturbed sites for priority invasive plant species. Although surveys are conducted year round, most happen between March and September. Survey areas are prioritized based on how heavily used they are and on the health of their habitats, with the goal of surveying all roads and trails every three to five years.

NPS surveys began in 2008, with other land managers launching their programs in subsequent years. One Tam initiated surveys in 2016 to add capacity to partner agency efforts.

One Tam partner agencies commit significant resources to mapping, monitoring, and managing invasive weeds on their lands. Full-time and seasonal staff, as well as interns, manage volunteers and lead these stewardship activities.

Land managers also rely on contractors to map and control targeted invasive plant populations. Wide Area Fuelbreak projects on both MMWD and MCP lands are implemented by contractors for both fuels management and resource enhancement. In 2012, NPS and State Parks staff launched comprehensive watershed-wide target invasive plant management in the Redwood Creek Watershed with the help of staff, contractors, and volunteers.

Mt. Tam supports more than 40 rare, threatened, and endangered plant species. Location and population data is available for many of these species through field surveys conducted by One Tam land managers and partners including the California Native Plant Society (Marin Chapter).

The scale of each monitoring program varies based on staff and volunteer resources. For example, NPS staff conducts annual rare plant monitoring, with individual populations visited once every three to five years; however, MMWD staff are in the process of re-inventorying their rare plant populations and have updated data on approximately 80% of the over 400 individual patches on watershed lands within the past five years.

(1) Planted more than 14,000 native plants to revitalize disturbed and compacted redwood understory habitat; (2) Converted asphalt trails into raised boardwalks to reduce compaction and guide visitor access; (3) Established boot-washing stations to reduce the risk of Phytophthora (SOD) spread; (4) Conducted an inventory to assess canopy health and species richness; (5) Reduced the entrance parking lot size and converted part of it to a plaza; (6) Raised the Hillside Trail in Muir Woods above the fragile redwood root system; (7) Collected LiDAR data to create topographic, stream channel, and tree canopy maps of Muir Woods and Kent Canyon which will help track changes to the forest over time