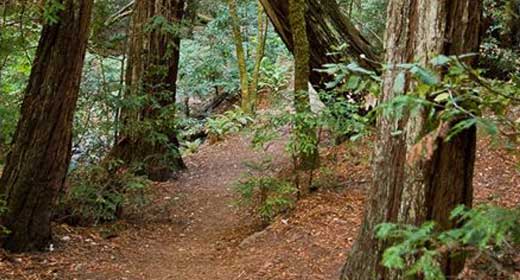 This climb up the steep slopes of Mt. Tam reveals beatiful vistas of the Bay Area and the Pacific Ocean. The redwoods of Muir Woods gradually give way to Douglas-fir, bay laurel, and tanoak as the trail wends upward. From the Bootjack Campground, established in the early 1920s, continue to the Mountain Theater.  After a storm in 2012 threatened to undercut a portion of the trail near its Rattlesnake Creek crossing, a new rock wall was installed and the existing footbridge removed and replaced. The renovated Bootjack Campground opened in 2013.